Our acts and shows already created.

We like to invent news acts so if you've got an idea, or if you would like a specifically themed act for a special occasion, or a specific audience, contact us, we would be delighted to hear it!

A wandering pirates team gets their hands on a captive who possesses a mysterious treasure map. The tricky path to their loot will lead them to a strange encounter... The Pieds Jaloux company comes forth with a joyful and dynamic show, with juggling, acrobatics and backstabs!

Sometimes cooperatives, but mostly egoists, our pirates are keen on partying. Between comradeship, love and jealousy, seven artists offer you a colourful show, designed for an audience of all ages.

This 50 minute show was first performed at the rêves de cirque festival in 2016 and started touring in the Paris region in 2016-2017.

This show, as well as its soundtrack (available on Jamendo), is under Creative Commons by-NC-SA license. Individual tracks could have a more permissive license, which can be checked on this Jamendo tracklist. 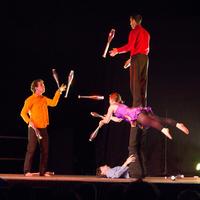 Two dancer acrobats start a romantic dance... and two jugglers decide to throw everything away!

A 10 minute show, full of energy, humour and clubs.

We presented this show at the open stage of the EJC in Millstreet (2014) and later at other conventions in France (2015).

A short version (8 minutes) with 6 artists has been shown in 2016 in Versailles.

Extract of eJuggle, the European Juggling Association journal, after our first representation in Millstreet:

“La Pieds Jaloux” is a 4 person troupe from France. Christophe Travert, Jerome Travert, Remi Sainct, and Denise Maurice are hobbyists but obviously invested a lot of time practicing to put together a great act. They started with a couple doing acro-dance that kept getting bothered by the 2 guys passing in classic Las Vegas style. The interruptions and interference soon turned to interactions as all 4 passed in a myriad of acro-passing patterns. They did and a double-feed between two pairs of shoulder-stands. Unfortunately they missed a few attempts at their finale trick of 3 person high shoulder-stand with all three juggling. [...]

In a surprise return to the stage, “La Pieds Jaloux” came back to try one more time with their finale trick and they stuck it their first try. Amazing! 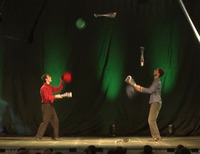 Two jugglers pass with six clubs. When one of them drops, the passing gets messed up. One at a time, the jugglers must find a new occupation and in a sudden surge of enthusiasm a hat is added to the clubs to create a full 6 objects passing again.

This short act has first been played in May 2012, then in August during the EJC in Lublin (Poland) and at various occasions after that.